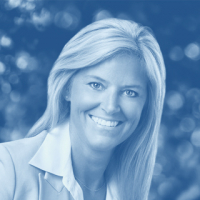 Ms. Rachael Jarosh is president and chief executive officer of Enactus, the largest experiential learning platform dedicated to creating a better world while developing the next generation of leaders with a head for business and a heart for the world.

Under Rachael’s leadership, Enactus is driving innovation to create greater impact for the 72,000+ participating Enactus university students in 37 countries and for the countless communities in which Enactus students are addressing economic, environmental and social challenges.

As a global network of business, academic and student leaders, Enactus believes investing in students who take entrepreneurial action for others creates a better world for us all.

Rachael joined Enactus in 2016. Prior to that, she built a distinctive professional portfolio in communications and philanthropic strategy, law and finance. She served as president of the foundation at Pentair plc, where she led the effective repositioning of the organization, and launched a multi-year water initiative in partnership with the Center for Disease Control and non-profit organizations which now provides sustainable access to safe water for 3M+ people.

Earlier, Rachael worked in strategic communications and equity analysis, and began her career as an attorney. In addition, Rachael is a writer, and has been published in the Wall Street Journal and the New York Post among other outlets, and she is the author of a forthcoming nonfiction book.